Please try accessing the site with a more recent browser, since your browser is dated and does not support Square Enix Store configuration.
See full product details
Due to ongoing server congestion issues, sales of the FINAL FANTASY XIV Starter Edition and Complete Edition products have been temporarily suspended. Click for details.

Enter the realm of Eorzea and join 25 million adventurers worldwide.

The Complete Collector's Edition is perfect for new players as it includes the base game and all expansions through Endwalker – all in one comprehensive package! This edition also includes in-game bonus items!
See full product details

Enter the realm of Eorzea and join 25 million adventurers worldwide.

The Complete Collector's Edition is perfect for new players as it includes the base game and all expansions through Endwalker – all in one comprehensive package! This edition also includes in-game bonus items!
See full product details
$139.99
$139.99
FINAL FANTASY® XIV ONLINE COMPLETE COLLECTOR'S EDITION [MAC DOWNLOAD]
$139.99

Get 60 Members Rewards
When you buy this product

a)   Please note that a Square Enix Account is required to play FINAL FANTASY XIV.
If you do not possess a Square Enix Account, you will be asked to register one at this time. If you already have a Square Enix Account, you do not need to register a separate one and may proceed to sign in with your current Square Enix Account.
Note: A Square Enix Account differs from a Square Enix Members account.
6)  When requested, please enter the product registration code to complete the initial registration process.
7)  To begin playing, enter your Square Enix Account username and password and select Log In.
8)  After logging in, the launcher will check for the latest game data. If necessary, the latest files will be downloaded from the network, and the game will be updated to the most recent version. This process is automatic, and can take anywhere from several minutes to several hours to complete. The estimated time remaining will be displayed under the download progress bar.
9)  Once the game has been updated, the Play button will be displayed. Click this button to start the game.
If you have any questions regarding the above information, please contact the Support Center by clicking the following link:
https://support.na.square-enix.com/main.php?id=5382&la=1
PLEASE NOTE
- Your code is unique and can only be redeemed once per service account.
- This code will only work on North American Square Enix accounts.

THE CRYSTAL'S CALL
Hydaelyn─a vibrant planet blessed by the Light of the Crystal.
Amid azure seas, encompassing the westernmost of the Three Great Continents, there lies a realm embraced by gods and forged by heroes. Her name...Eorzea.
It is here that your tale unfolds. Beckoned by the Mothercrystal─the source of all life─you must embark upon a quest to deliver the land from an eternity of Darkness.
HYDAELYN
Since time immemorial, this verdant planet has seen the births of lives uncounted.
But the land now bears grievous scars, and threatens to slip into a gaping maw of death and darkness.
You who would bring the light of hope to Hydaelyn...
You who would heed the whisperings of the aetheryte and take up the mantle of "adventurer."
This is your journey—a new tale to echo down the ages.
EORZEA
Comprised of Aldenard, the westernmost of the Three Great Continents, and its surrounding islands, the realm of Eorzea has been the cradle of several unique civilizations throughout history.
Towering mountains dominate the north, their peaks forever lashed with icy winds; to the south, a bleak expanse of unforgiving desert holds sway.
Yet these inhospitable lands hold irresistible lure for man and monster alike, for wide and deep flow the currents of aether, and rich are the veins of power-infused crystal.
In this harsh though vibrant region, the people of Eorzea have carved out their histories—a cycle of prosperous Astral and disastrous Umbral eras.
The First Umbral Era brought an end to the age of the gods, and there have been six such eras of calamity since the First Astral Era ushered in the age of man.
Each of the Umbral catastrophes has, in turn, borne the characteristics of one of the six elements. With all the elements now represented, it was believed the current Astral era would last into eternity.
But in the seventh verse of the Divine Chronicles, Mezaya Thousand Eyes prophesized a less fortunate fate. The "senary sun," or Sixth Astral Era, would indeed end, and the "septenary moon," or Seventh Umbral Era, would cast its shadow upon the land.
ADVENTURERS
The life of an adventurer is the pursuit of fortune and the pursuit of fame. It is the devotion of oneself to seeking out danger and glory wherever they might lie. It is an endless quest taken up only by the most intrepid and dauntless of souls.
The term came into popular use among the people of Eorzea little more than a decade ago. Left idle by the onset of the Age of Calm, a leading mercenary officer gathered to his side a number of trusted companions, and together they formed a guild dedicated to the common cause of aiding the realm at large.
Outside the modest station of their humble beginnings, a simple sign hung for all to see―Adventurers' Guild.
The Adventurers' Guild has since spread, and can now be found in each of the
realm's great nations. It is here that Eorzeans come with their myriad pleas and requests, and here that adventurers heed the call, whether it be the slaying of some foul beast plaguing the countryside, or the crafting of fine wares demanding a master's touch.
What greatness lies in store for you, adventurer? 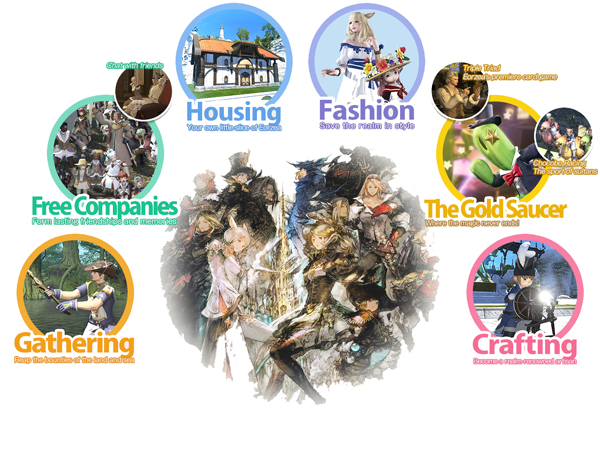 The Square Enix Members Rewards and Square Enix Store product Catalog need to be ordered separately at this time. If you want to continue placing your order, your current cart of MEMBERS Rewards items will be cleared and replaced with the Square Enix products. Click “Add to cart” to continue.