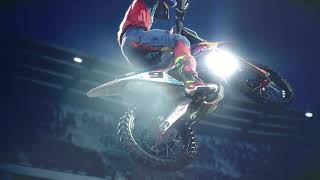 The only Official AMA Supercross Championship videogame is back, more official than ever: MONSTER ENERGY SUPERCROSS – THE OFFICIAL VIDEOGAME 3!

Everything is official, from real teams to the training compound, Monster Energy Supercross 3 is the exact replica of the Supercross world.

Release Date: February 4th, 2020
Monster Energy Supercross – The Official Videogame 3 will feature the 2019 Monster Energy Supercross season with 100 riders from both 450SX and 250SX categories as well as 15 official stadiums and tracks.  And now, for the very first time in the series, the game will include the opportunity to join the 2019 Official Supercross Teams in the career mode. You will finally have the opportunity to start your career and become a teammate of an official Supercross rider!

You can now enjoy the co-op experience with your friends in the new amazing compound, inspired by the Corona Supercross Test Track. You can train, race or roam free on the biggest area ever!

Monster Energy Supercross 3 takes Multiplayer to the next level. Thanks to new dedicated servers, you can now experience the best multiplayer feature ever with all new content and modes, like the new Race Director mode. This feature will give you the opportunity to create the best online competitions.  Now you can do things like decide the players’ starting positions, assign penalties or choose which cameras to focus on.

Last but not least, the track editor is back. Boost your creativity and share an infinite number of tracks that the community can race on!